Conte's Bike Shop has a rich history, and we're proud to be dedicated to serving and improving the many local communities where we now reside. Learn more about our company roots, and thank you for your continued support! 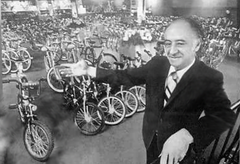 Charles R. Conte, Sr. opened the first of the Conte’s family-owned bicycle stores in Newport News, Virginia in 1957. Conte, the son of Italian immigrants, was a hard-working machinist at a nearby shipyard when he opened his small, neighborhood bicycle and repair shop. He ran the shop based on his love of bicycles and his vision of providing personal service, and top-quality products that he could personally guarantee. Conte’s became famous for providing customers with a one-of-a-kind buying experience that made its customers not only repeat customers but customers for life.

By 2002, the corporate headquarters was moved to Virginia Beach. Thereafter, David Conte acquired all of the ownership interests in the company.

Conte's Bike Shop is proud to have been selected as a 10-time winner of the coveted “Top 100 Best Bicycle Retailers” in the country designation awarded by the National Bicycle Dealers Association. Working with the top suppliers in the industry and the industry’s leading trade publication, Bicycle Retailer and Industry News, criteria used to pick the winners included market share, community outreach and store appearance. “There are more than 5,200 bicycle retailers in the United States,” said Thomas Prehn, president of the research company. “For Conte's Bike Shop to achieve the status of one of the Top 100 Bicycle Retailers in the nation is no small matter. This bike shop stands as the best of the best,” he said.

Conte’s Bike Shop has been selected by Tidewater Women Magazine as the recipient of the Ladies Choice Award in the Bike Shops category. This distinction followed the Company’s designation as “Retailer of the Year” by the Retail Alliance. In 2016, Bicycle Retailer and Industry News selected Conte’s as one of only 6 Award nominees for National Bicycle Retailer of the Year.