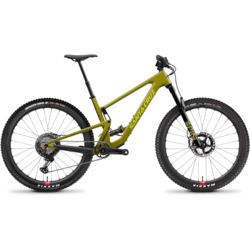 Santa Cruz Tallboy Carbon CC XTR Reserve
$9,799.00
If ever there was a gravity riders’ XC bike, the Tallboy is it. The new 120mm Tallboy takes a leap further into what short-travel bikes really are capable of. With kick-ass lower-link VPP suspension, a streamlined design, the typical Santa Cruz refinement, and rather radical geometry, the Tallboy is back to being a genre-bending folk hero. Sure, 10mm more travel might only seem like one small step—but coupled with a lower link-driven VPP suspension design, this is one giant leap for the Tallboy. It’s the kind of bike that makes you sprint while going up, along, over, or down due to the maximum efficiency of the VPP design and responsive, lightweight chassis. But, because it shares the same engineering principles as our longest travel bikes, the progressive lower link-mounted shock feels equally at home doing cross-country as it does in extreme-country. Paired with a 130mm fork, the new Tallboy becomes ever more appealing to riders who like to open it up. And, the geometry, that's a big part of what's going on... Established theory suggests shorter travel bikes get ridden slower, therefore require steeper and more conservative geometries. In reality though, when was the last time you ever throttled back on a fun trail because you weren’t on a bigger bike? Knowing your answer, we mimicked our longer travel geometry to create a bike with a 65.5-degree head-angle, generous front center, and short-offset fork, something rarely seen on a bike of this ilk. And, the radical thinking doesn’t stop there. The Tallboy’s short-short 430mm chainstays have +/- 10mm of rear axle adjustment to ensure riders of all sizes and styles feel equally at home. Match that to a relatively low BB (335mm and 37.5mm drop), and you’ve got a combo that’s ready to haul into every pocket turn and launch out the other side. Build Highlights - Carbon CC frame - RockShox Pike Ultimate 130mm fork - FOX Float Factory DPS Kashima rear shock - Santa Cruz Reserve 27 29-inch carbon rims - I9 Hydra hubs - Maxxis Minion tires - 12-speed Shimano XTR drivetrain - RockShox Reverb Stealth dropper seatpost 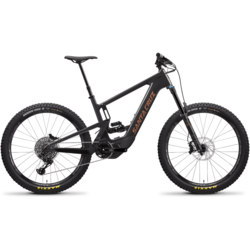 Santa Cruz Heckler 1.0 CC S
$8,399.00
Let The Heckling Begin In 1996 the Heckler was created as a rude interruption to mountain bike designs of the time. Its solid, full suspension build and aggressive swagger proved that a well-proportioned trail bike could elevate rider’s on-trail experiences. Today’s Heckler carries all that attitude forward into a new era. A full carbon frame, VPP suspension, and pedal-assist technology have merged to create something light and agile that amplifies the fun. Like all Santa Cruz bikes, the Heckler pedals well regardless of watts involved. The lower link VPP approach is tweaked to deliver slightly lower anti-squat versus a Bronson. This adds a touch more support and traction over rough stuff when pedaling seated - a major advantage of having a Shimano motor on your side. And, like every Santa Cruz bike, the Heckler is built for the rigors of true mountain biking. Shimano electronics were chosen for their refinement and reliability, while quality pivot hardware, easily replaceable radial bearings, and no-nonsense internal cabling were considered with a mechanics sanity in mind! Creating an e-MTB demanded careful consideration. For us, the Heckler’s potential to loft riders up to new heights is what gets us most excited. Trailblazers like Greg Williams and Danny MacAskill weren’t asking for a dumbed-down ride up. Or down. They wanted something to push their riding to new levels and held maneuverability sacrosanct as the new tech was introduced. The Heckler’s boundaries aren’t defined by distance, laps, or time. The boundaries in our head that say, “Don’t bother", “Turn back", "Impossible." Smashing these boundaries is what got us hooked on riding in the first place. Heckler’s not about taking things easy, it’s about making things possible. - FOX 36-E Float Performance, 160mm fork - RockShox Super Deluxe Select+ shock - SRAM GX Eagle 12-speed drivetrain - DT Swiss 370/Race Face ARC HD wheels with Maxxis Minion tires - RockShox Reverb Stealth dropper seatpost 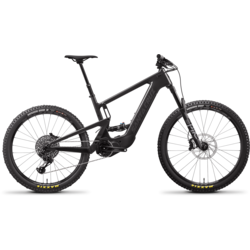 Santa Cruz Heckler MX CC S
$8,399.00
Our bikes have always been about amplifying fun, so our goal for the Heckler MX was to make something light and agile that can help you on-site blind terrain. A mixed-wheel bike gives the confidence of a 29-inch wheel up front for traction and roll-over when you're caught off guard by technical features. The 27.5-inch rear wheel allowed us to keep the moderate chainstay length of the Heckler (445mm), which provides a snappy and easy-to-handle bike on tight, demanding trails. We did this without compromising on the standard Heckler's geometry, so the bike's character is still very light and accurate. The Heckler is about expanding your own trail map—accessing previously unreachable trails, unlocking less-used trails and doing so independently. Whether tackling rides that are guarded by monstrous climbs, or cramming more into less time, it's about rarer rides becoming the norm for you. The interchangeable 500wh battery keeps the weight down compared to bikes with larger batteries but it's fast and easy to put in a fresh battery for even bigger, longer days. The new Shimano EP8 motor is lighter than E8000 drive unit (380g), has more power (85Nm versus 70Nm), smaller volume (-10%) for greater ground clearance, less drag (50%), more heat resistant, and is tuned to give more power in Trail mode. All this means it's even more capable of tackling longer, tougher rides. We use the full Shimano STEPS battery and motor system again because it means assured reliability and global aftermarket service. 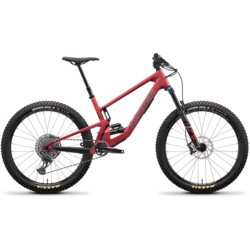 Santa Cruz 5010 C S
$4,999.00
The 5010 turns obstacles into features. Its nimble, poppy feel makes even the most mundane rides feel like they're loaded with features to hop, skip and jump over. It's the kind of bike that makes new trails feel as familiar as the back of your hand. 27.5 is the fun-sized wheel size. Smaller wheels provide an ideal balance between toughness and weight savings, making them the most fleet-footed (or quick-fingered) whether launching logs or weaving through stumps. With its quick and agile character, the 5010 has become a go-to plaything for progressive riders the world over and the only contender on any backyard trails. It’s a bike that goes harder than its vital stats may suggest. A 140mm-travel fork is paired with 130mm at the rear, the lower-link VPP configuration of which leaves you feeling there’s a lot more travel at hand. And, you can choose how out of hand you want to get, as this pocket rocket fits all sizes and types of rear shocks. It’s no handful either. The relatively slack head angle makes it predictable to steer, the relatively low BB height turns like it's on tracks, and the short chainstays make this plaything easy to pick up and throw around. No matter how much of a big kid you are, the bike grows with you. We’ve tailored the geometry so frame size is matched to size-specific chainstay lengths, and super-low standover heights make it feel (almost) like that BMX you had as a kid. Okay, perhaps that’s a bit nostalgic, but the 5010’s certainly a perfect gateway to the highs only proper mountain biking can offer. The 5010’s balance and poise can turn any rider from cautious neophyte into a fully-fledged flyer. The legendary Santa Cruz fit, finish, and quality construction make this pocket rocket tougher than a Tonka toy. Fun and games are guaranteed, and the frame, linkages, and optional Reserve wheels come with a lifetime warranty. So don’t be afraid, roll up your sleeves and go get creative. - Carbon C 27.5" 130mm Travel VPP frame - RockShox Super Deluxe Select+ shock - FOX 34 Float Performance, 140mm fork - SRAM GX Eagle drivetrain - RockShox Reverb Stealth dropper post
Page 1 of 1